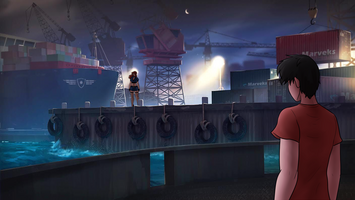 It's been a while since we've done a public release! It's time.

-Flagging updated
Such that incomplete paths (like proposing to Demetria you take a third option) now announce as Coming Soon rather than just grayed-out.

-The locker room Team-Building-Activity is now animated, with some slick dialogue presentation stuff coded by the ever-brilliant Bert.

-A gang of cockney hobos can now rail you in a back alley. (Finally)

-Art for the Rusty Starfish jobs is now present

-Mallory Part One is now implemented.

-A male-on-futa scene added (for you heretics)

-Fixed a bug that made Twoholes laughter crash the game

-In retrospect, it was obviously a bad idea for us to do a Christmas Eve release.

-The monthly release schedule was pretty rough. Everyone is like "Sacha, come hang out and play video games and have casual sex and otherwise enjoy your life" and I gotta be like "aw shucks everybody sorry but these dickgirls aren't going to write themselves, maybe next year".

So, we're likely to try out slowing down the  release schedule until it's sustainable, for a while.

-We've now enabled yearly subscriptions on Patreon, if anyone wants to fuck with that.

-There will also be Mallory Part Three. (And possibly Part Four.)

-We're still working on figuring out how to release the game in content patches rather than forcing a redownload every time. Or rather, we know how to do it, but so far, every release, I've ruined the content patch by going back and editing old stuff.

In my defense, I wrote Vicky's dialogue in 2015, so it's like reading my own teen poetry. I'm constitutionally incapable of *not* fixing it.

-We're planning a special Valentines Day episode for a certain premier tier of backer (which will presumably come out near Valentines Day.)

-We have moved from the Plotting phase to the actual There Is A Script And Some Art phase of Wallis.

and everyone on the FDW team.

make the main character a futa

Or a genderbending kinda thing into futa