A downloadable game for Windows and macOS

Our FutaDomWorld Side Story, My Futa Valentine, is now complete. It's a short kinetic novel set in the FDW universe, exploring a fetish we haven't much touched on.

really depressing but the ending song makes it funny xD

it was depressing until half way through the sex part. the comment section hype it up too much for me... or i guess im too degenerate

this was really fucking depressing. 8/10

Needs more action less reading. Should have interaction choices with the 2 futa on street and the futa policewoman as well... plus another and it would be great.

My cursor is stuck as the target from maybe killing Claudia.. idk i couldn't go through with it

Im just so sad, your every game doesn't have like neutral or escape ending, when i try to make the main guy normal and not submissive,  he always ends up being a toy i just die inside out of guilt, that i couldn't do anything to stop it, and in this game when he has to watch her wife do the thing, i feel so bad

Now, i know these games were meant to make futa dominate, but at the end of the playthrough, my hands always shake out of stress and guilt, it probably sounds cringe and like im overreacting, but for me it's the most discomfort i felt in my life.

Also i enjoy these games for the most part, and i don't think they're absolute worst.

I haven't played this side story yet, but it appears to have NTR so you are probably right to feel stressed/guilt. I will say for the main game though,  pursuing Suni (although the neutral route doesn't have a true epilogue) and if you are a patron, the Mallory route is complete with different endings, and one of them may accommodate your male ego.

I personally think you should quit playing the games, but if you still enjoy them then I really think you should understand the context a bit more. To this day in more traditional countries women are still treated as 2nd class citizens, sole purpose and fulfillment to serve their husbands as wives and mothers, but even then their husbands could still legally beat and rape them.

In FDW, men are 3rd class citizens and have about the same rights, intelligence, and strength as a child would in our world, so you should feel lucky if any futa respects and desires your companionship at all. When a woman is inseminated she makes a child and you can raise it in your image. In FDW, when a man is bound and inseminated the futa can raise the man in her image also.

I'll admit it is sad to see one's intelligence go after binding, but it is the necessary sacrifice to achieve unconditional love in the FDW universe, for both the man and the futa, and realizing this fact actually made me cry after one of the Mallory endings, out of bittersweetness, and for how it was so beautifully portrayed.

Like Demetria quotes in the game "'Love is the wisdom of the fool and the folly of the wise' and men are fools." Good luck my friend.

What actually hurted me the more was that the wife was so desperate to be pregnant, she half-confessed that she would have leaved her husband if he didn't complied to let her ex inseminate her. What I find really enraging about it was that in the back of my head, I have the thought of the hundreds of thousands of children living either in orphanage or alone in the streets that hoped to have a family of their own. This reminded me that those people could have at least tried adoption instead of doing so many contrived inseminations, artificials or "naturals".

For me, if your partner is willing to ditch you because you are sterile, quit as soon as you can! This person isn't worth it!

Keep playing, FDW has a ending where you can escape the city and at least two where you're happy and cared for.

felt so bad playing this :(

YES! Edit: boy, I should have known this would include NTR.

Please port this for Android.

You can download windows version and open it with joiplay app. That's what I do with all renpy games here.

thank you so much.

oh wow, I didn't know that was possible. This opens up possibility to play so many games I've seen but couldn't play. 🥰 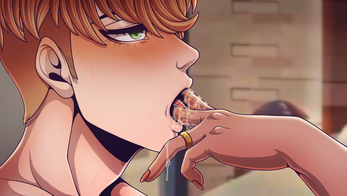